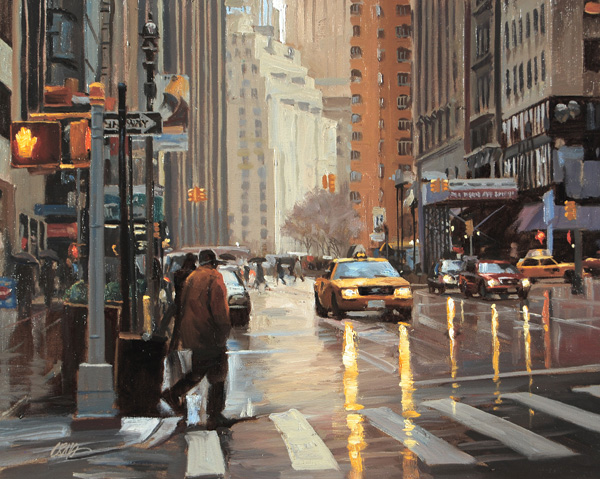 When Craig Nelson transitioned to full time fine artist in the late 1980s from a career as anon demand illustrator of album covers and movie posters, in the process moving from Los Angeles to Northern California wine country, most of his painterly oils were figurative. But my biggest detriment as an artist, he laughs, is that I get bored easily. So I am always looking for different subjects.

His search for something new led him to landscapes and cityscapes. But all my students are already painting San Francisco, says Nelson, who directs degree programs in drawing and painting at the widely respected Academy of Art University. So he is journeyed farther afield to capture urban settings in places as diverse as New York City, London, and Tuscany. I look for light, mood, and character, he says. I want subjects that look like they have a history.

Rich in their sense of place, his paintings feel deeply immersive, capturing such iconic imagery as the red telephone booths  in London and double decker busses and the rain slicked streets of Manhattan. In his cityscapes, one notable element is human forms. It is not the city that makes the people, says Nelson, still a figurative artist at heart. It is the people that make the city.

"Reflections from a Painter" ~ Jeff Jamison in American Lifestyle Issue 75

"Above & Beyond" ~ J. Christian Snedeker and Dave Merrill in Carolina Arts

"Above & Beyond" J. Christian Snedeker and Dave Merrill in the Moultrie News

"Meet Me in Paris" ~ Lindsay Goodwin in Carolina Arts

"Get Lost" ~ Mark Bettis in the Moultrie News

"Summer in the City" ~ Jeff Jamison in Carolina Arts

"Summer and the City" ~ Jeff Jamison in the Moultrie News

Press clipping from the "About Town" section of Charleston Magazine. January 2015 issue.

"Return to Grandeur" ~ Lindsay Goodwin in the Post and Courier

Aleksander Titovets: Past and Present

Full Interview in the Moultrie News about Aleksander Titovets and the opening of his exhibition at the El Paso Museum of Art, entitled "Past and Present."

Goodwin is featured in the International Artist Magazine under a page titled, "Master Painters of the World."

The story of the Aleksander & Lyuba Titovets' artistic journey.

Article on Richardson and her gallery in the Fall 2011 issue of Charleston Style and Design Magazine.

Jeff's painting, "French Quarter" was accepted into the Oil Painters of America Eastern Regional Juried Exhibition. The paintings will be judged and on exhibit for sale at the Addison Art Gallery in Orleans, MA from September 17 through October 15. As usual, we are very proud of him!

The Titovets were featured in the American Art Collector magazine.

Art Galleries & Artists of the South

Our gallery is featured in Volume 6, Issue 1 of this renowned art magazine.

Featured in the El Paso Times

A review of the 9th Fine Art Annual in American Art Collector magazine featuring our gallery and the works of Lindsay Goodwin.

On the 15th anniversary of the Titovets' immigration to the United States, they will be having a grand exhibition of new landscapes at our gallery. Featured in the American Art Collector magazine.

Goodwin is featured in the October edition of the Southwest Art magazine.

"New Art in a City Famous for Being Old"

A feature on our gallery from the FineArtConnoisseur magazine

Goodwin is named one of the 21 under 31 emerging artists by Southwest Art magazine, September 2005.

Though they have lived in Texas for the past ten years, the Titovets continue to be inspired by their homeland of Russia.  Featured in Southwest Art magazine, November 2003.